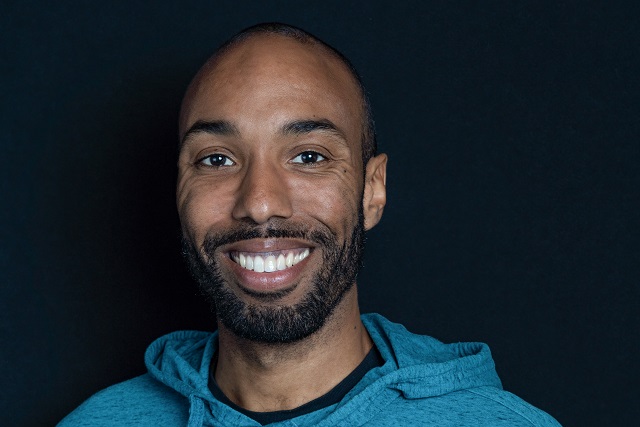 (Photo by Ray Singh) When you discover your calling, how do you honor it? Take the advice of Chris Colbert (pronounced KOAL-bert), CEO of DCP Entertainment, who not only found his vision – but founded it, too.

The goal? To foster dialogue in need of discussion, like reducing the stigma of suicide and increasing awareness surrounding mental health. DCP Entertainment tells stories through real-life, raw perspectives, like that of Talinda Bennington, wife of the late Chester Bennington, who was known by millions as the former lead front man of Linkin Park.

Colbert found his calling more than a decade ago as an intern with Sirius Satellite Radio (now SiriusXM Radio). At just 21 years old, and while earning his degree from Seton Hall University, Colbert helped to create Oscar and Grammy award winner Jamie Foxx’s comedy and music channel, “The Foxxhole.”

Colbert then joined SiriusXM full time and helped create “Carlin’s Corner,” a 24/7 George Carlin comedy channel, as well as “Que Funny,” the only bilingual Latino comedy channel on SiriusXM at the time. He served as Director of Urban Talk and Comedy, and oversaw programming and operations for permanent and pop-up stations and channels, including for “Urban View” and “Blue Collar Radio,” now “Jeff & Larry’s Comedy Roundup.”

In 2017, Colbert transitioned to Vice President of Programming for Cadence13 (formerly DGital Media). While there, he delved into deeper content and oversaw all documentary projects and produced top podcasts, including “Cover Up,” “Origins,” and “What Really Happened,” among others.

What are his tips for curating that perfect story and honing in on the ultimate vision? I’m turning the tables on Colbert and asking him the questions this time!

Which niche and why?
Q: Why was it important for you to find your own niche and establish DCP Entertainment? When did you know it was time to launch your own business?

I started DCP Entertainment because I saw a void in the media industry for not only providing opportunities for minorities, LGBTQ and women, but giving them the same level of resources for the opportunity to be successful.

At the same time I was starting to fully realize my own self-worth. When you work at a company for so long, especially one that has numerous celebrity & brand partnerships, you never really know your value in the industry. Basically, it’s hard to figure out if people are partnering with you because of your abilities, or if its because of the company you’re representing. Hopefully it’s a little bit of both, if not solely because of what you personally bring to the table.

Once those things came together in 2015, I started figuring out how I would fund and operate this company, because I already had the network to bring in talent. But even then, it took me until 2017 to leave SiriusXM, and then 2018 to leave Cadence13 to go all in on DCP Entertainment. So it took time even once I figured it out.

Q: What tips do you have for curating impactful content, and ensuring that it’s both unique and hits a sweet spot with your audience?

Get out amongst people and talk about ANYTHING. I’m a bit of a hypocrite on this one right now because I’ve been working with my head down a lot lately and haven’t been out of the house or office, but this is a great reminder for me that you can’t create content for people without finding out what they want. Yes, you can do surveys and ask people what they want, but you can find the unique ideas by having conversations with people and noticing common threads of what various people want to talk about when they’re being casual, which is the state that they’re usually in when they would listen to a podcast or watch a video.

Q: For entrepreneurs, it’s easy to want to become the master at everything, especially when you’re running your own business. What tips do you have for prioritizing goals, particularly when they’re all important?

I don’t think I have any good blanket rule to give, as every industry has its nuances that would change my answer to this question. But what I can say is that you need to be flexible. This goes beyond entrepreneurs and applies to all people, even in our daily lives. What is most important and the path to success are constantly changing, whether it be because of new technology, a crisis, or just that you learned new information that helped you see new routes for success. You have to be ready to pivot your focus and strategies.

…For business or for pleasure?
Q: What are your top three tips for establishing and maintaining successful business partnerships?

Whether asking overtly or by being an intuitive listener, find out what constitutes success and failure for your potential partner. Not only so you know what will satisfy their goals, but to also know if you’re equipped to even take on the partnership in the first place.

Accept immediate responsibility when you or your team makes a mistake. And if its your team, accept that responsibility personally, as it is your responsibility to make sure things go smoothly if you’re the person representing your company. Accountability is extremely important, but just make sure not to repeat the same mistakes.

When the relationship ends, try to give them a “parting gift.” By that, I mean some sort of added value to the relationship that they weren’t expecting, like helping them connect with their next partner, or as simple as writing a positive review for their company. You want people talking positively about you, even if their particular deal with you didn’t work out.

Q: If you become friends with a business partner, what relationship should take precedence: the business aspect, or the friendship?

I was fortunately raised by an entrepreneurial mother, who raised us to understand you have to keep the two separate. You can have friends that you do business with, and it’s a great thing if you do, but the business decisions have to be made outside of the friend space. It can be easier said than done, and sometimes you may be able to make that distinction, and the other person can’t.

So I feel like I started this, feeling like they’re both equal, but I guess I’m actually saying the business takes precedence.

When to hit pause and reset
Q: As an entrepreneur, you’re responsible for…everything. How do you decompress on a daily basis?

Playing sports. That’s always been it for me. I’m a lifelong jock. Don’t worry, not the cocky letter-jacket-tripping-freshman in the hall kind. For me sports, like basketball, takes my complete focus mentally and physically, so it helps me release a lot of energy from the day or week, and kind of resets me. But because I work and travel so much (I’m on the road 100-150 days a year), it’s hard to maintain that routine or stay in good enough shape to play without fear of injury. So I’m trying meditation as that new technique. I still haven’t gotten good enough at that to get my mind to shut up. But hey, I’m gonna keep trying!

Finally…
Q: What are two truths and a lie?